Another Day in the life of an EA

Posted on June 5, 2011 by patriciainpalestine/israel

The illegal settlement of Yithzar is  situated at the top of a mountain: the hub of a malevolent presence permeating the once peaceful  valleys to the north,  south, east, and west    where the Palestinian Villages of Madama,  Asira al Qibliya,  Burin,  Iraq Burin and Urif are located.

Yitzhar has been responsible for a ‘reign of terror’ on these villages. EAPPI, along with other human rights organizations, including B’Tsalem  ‘ The  Israeli Information Center for Human Rights in the Occupied Territories,  monitors the  actions of the settlements and settlers, visits the families of those who have been harassed and/or harmed by the illegal actions of the settlers and informs human rights organizations of violations.

Madama was the first of the villages to visit. Five days ago, Hammid Gbrel Ahmed Kut, 68, took time for prayer as he was tending his sheep. Approximately 15 settlers came upon him and beat him with long  sharp sticks.  A video taken at the hospital showed three, four-inch gashes to his hea;, his body was cut and bruised. A neighbour witnessed the attack and called his son to  help Hammid. He noted approximately 50 settlers watching from the top of the ridge, he believed, to intervene if Palestinians came to Hammid’s aid. Immediate medical care probably saved his life. His son, Ahmed, told us, “the settlers left him for dead. If they had thought he would live they would not have left and we would not have our father today.”

His revenge? …..two of his son’s are getting married this weekend. The first of the three-day celebrations is to take place this afternoon with a party and dancing in the evening. As we were leaving, his wife appeared, palms reddish-brown with henna, as she was helping her, soon to be, daughters -in -law  prepare for the wedding. 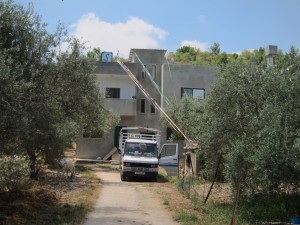 We proceeded to Burin to visit with the Soufin family.  A road constructed for Yitzhar  has separated their home from the rest of the community. The house is accessed through a tunnel dug under the road. Because they have had many attacks from the settlers, paint bombs thrown against their house, crops burned, etc. B’tsalem issued a video camera to the family so the attacks can be documented.  A documentary is being produced from the work of these amateur photographers. Three days  before, settlers attempted to set fire to the barley crop. Luckily, the fire didn’t catch…the crop was too green. The coming weeks will be unsettling  as the crop  ripens.

Asira al Qibliya was our next stop. We met with Nahia, who will give birth  in two weeks, and her husband Jamal.  It  should be a very happy time for this family.  But that happiness is tinged with both indignation and fear. For the past two weeks on Friday, soldiers fully armed in combat gear, M16 rifles pointed and ready,  burst into their home,  shouting orders, shoving Nahia and her children, frightening the family. Her little girl was terrified  that the soldiers were going to shoot her mother. The children are showing signs of post traumatic  stress and the parents are worried. Her 12-year-old son has started bed wetting, a common indication of extreme stress.  I informed them that  Doctor’s Without Borders have set up an office in Nablus just to deal with the effects of this sort of trauma on children, and offered to make the referral.  Jamal, works away from home, making this time especially worrisome.

On our way to the next village of Urif, we are called back to Madama. The settlers are trying to burn the crops. The Palestinians put the fire out and the settlers threw stones at them. The IDF arrived and shot tear gas towards the Palestinians! By the time we arrive the settlers have retreated but everyone is anxious. We speak with the mayor, Ihab, who promises to call if there is more trouble.  I think of  the wedding celebrations, disrupted !!

Our next stop is Urif.  We were introduced to a woman Jusra, who has a dibilating rheumatic disease, on our last visit to this village. We were asked if there was anything we could do to help. They are very poor and Jusra is unable to take care of her family. Her eldest daughter, 16,  must miss school to help at home. Another daughter has a severe eye condition and they are not able to afford medical care. There is very little EAPPI can do to help. However, we have referred her to Physicians for Human Rights and they have agreed to investigate her case.

It has been a long day. There seems to be so little we can do in the face of so much injustice. However we can witness, offer sympathy, and promise to ‘tell the world’  what we have seen. This, they tell us, is enough!

This entry was posted in Uncategorized. Bookmark the permalink.

4 Responses to Another Day in the life of an EA